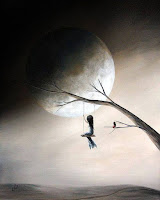 I hear the rhythmic sounds, muted screeches of metal on metal, spaced a second apart. The mind takes slightly more than that to register the source of the sounds. I walk over to the balcony and lean down to look. Fourteen floors below, I see the swing in motion, swaying up and down – the rider a tiny apparition in the distance. It is dark all around; the setting sun has long since surrendered to the starry skies. I only catch blotches of white; I believe it to be her skirt billowing in the soft breeze – the same breeze that rushes up to meet me as well.

It’s always a ‘her’. It has to be a she. The mind refuses to conjure otherwise. I see her hair flying haywire with every drop and getting whipped up with every climb. I hear her giggles echoing through the night. She’s played a hilarious prank on her colleagues today, one that they’re going to remember forever. She’s acquired lifetime bragging rights over her acting skills as well. They tell her it was Oscar worthy.

Or maybe it isn’t that. She is there because she needs a break. Her sobs make her way up to me. Her five-year old has thrown yet another tantrum and overturned everyone’s dinner. His doctors want him to be labeled as an autism case and she is fighting them tooth and nail. Her husband would rather have his child committed to a nursing center than bear the burden. But she would be damned, if she lets anyone brand her son. Her cell phone resounds in the pitch of the dark, a shrill tone piercing the silence of the night. If only she could get a few more minutes of quiet, but sigh.

Or maybe, she just is. No high flying incidents. No saddening moments that pull her down. Just another day. A light jog in the morning, some rushed words with her loved ones, a hectic day at work, catching up with friends. There’s nothing particular she has achieved, yet there’s a sense of accomplishment. A day well delivered. And so she swings, up and down, catching up on moments through the day, pondering over snatches of conversations, feeling one with herself, recognizing her own self grow with the world around her. That’s probably it. She probably is; she just is. Nothing more; nothing less.

And as the cadence continues to make music, I wonder if it’s just the flowing breeze that binds us or if there is more in common between all these women and I, invisible intertwining threads that weave in and out binding person to person, differing combinations of snippets of life stolen from a huge master list and assembled to make us whole? Most days she swings, on some days she doesn’t. Those are the days she’s lost, but then she always comes back. Every day is a new day; every day will be a new ‘her’ and the possibilities are endless.

Nice writing, fantastic presentation and a unique style of story telling.������
I wish you get more time for writing��

Grown as a writer. Now profound in both thought as well as the writing. Way to go Deepa!

🙂 Thank you Anonymous 😛
I got time, the only other thing I need is motivation against inertia! 🙂

You can also use FB commenting! They will 🙂

Thanks Pradeep. I feel that 'growing' too! I guess it's coming out in the writing 🙂