Skip to content
This post has also been published on the Times of India website, NRI Contributors section. The article can be found here.
“My son is very conscientious. He likes every thing in its rightful place. He doesn’t like even one drop of the dessert spilling on his plate. It all needs to be in the bowl. So make sure you serve him properly. Got it bahu?” Says the mother-in-law to her daughter-in-law, looking at her son for affirmation while the father-in-law looks on approvingly and the ‘son’ sits zip-mouthed at the head of the table, nodding in response to his mother’s smothering question. Sounds familiar? It could have been taken straight out of any of those umpteen typical saas-bahu sagas famous in the decade of 2000s. Those were the days when such dramas ruled the Indian television, both the matinee and primetime slots, inspiring many a mother-in-law and daughter-in-law, embroiling them in a power struggle.

After a sumptuous lunch, homemaker mothers-in-law and daughters-in-law sat glued to the television screen, each of them relating in part to the characters being portrayed on screen and Ekta Kapoor came to be known as the queen of small screen dramas. Thousands of miles away, the whole set-up replicated itself as the same dramas were screened on Zee TV Americas or the Star Plus USA versions. In May 2008, my Venezuelan co-worker stopped me in the hallway and spoke about a Hindi serial that was being aired in his Homestead Hotel suite. He was hooked from that day onward and every other day he would stop by to tell me what was happening in the show, including some of the dialogues that he would understand through the subtitles. He would be curious to know why women would wear jewelry and heavy brocaded saris to work in the kitchen, how marriages have so much red in them and why widows wear white and have all these restrictions. I would sit patiently answering his questions, mentally chuckling at our conversation. 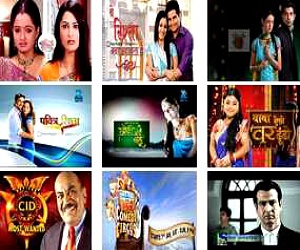 Fast-forward to the current decade. Scoot over saas-bahu serials, said the raw emotion filled, passionate romantic dramas with a heavy undercurrent and sizzling lead chemistry. TV series directors and producers like Ekta Kapoor, Gul Khan and Nissar Parvej saw an opportunity to strike gold once again. Soap operas like Iss Pyaar ko kya naam doon, Ek Hazaron mein meri behna hain, Diya aur Baati Hum, Dil Mil Gaye and the recently much-famous controversial love story Bade Acche Lagte Hain, names in themselves that are a mouthful, continue to make waves across the international circuit. Recent announcements like Barun Sobti, the lead of Iss Pyaar Ko, bagging the Public Award for the Best Lead Actor (Male) or the much famous Ram Kapoor and Saakshi Tanwar, the lead actors of Bade Acche Lagte Hain winning the Best Jodi award at the Global Indian Film and Television Honours are proof of this new trend. Recently BBC Asia interviewed the lead actors of Iss Pyaar Ko in separate 45-minute interviews that were heard and commented on by thousands of viewers across the world. Teen-aged girls start to go ga-ga over the lead actors while desperate online Youtube viewers halfway across the globe, wait twiddling their thumbs for the latest video to get uploaded so they can start commenting, predict the future storyline and such. Smartly cashing in on this fad are also corporations like Raza.com the calling card company, or entrepreneurs like Prem Jyotish the astrologer who sponsor primetime shows on the corresponding NRI Television channels.

However, also gaining immense popularity by the side are shows like Punar Vivah or Phir Subah Hogi,  that highlight social issues like widow-remarriage and downplay orthodox customs and traditions. The small screen has also successfully managed to lure major celebrities from the silver screen be it Raveena Tandon running her own show and inviting the who’s who of Bollywood or the recent thriller series Chhal written by the action film maker-duo Abbas Mustan. Of particular interest is the upcoming show Satyameva Jayate which promises to be of the people, for the people and by the people and vows to take the nation by storm. The recent promos released by the dashing debonair Aamir Khan and the official song which has garnered more than 600K views on Youtube within a couple of days of its release are witness to this. The fact that it will be dubbed in the four south languages as well as the decision that that the peoples channel Doordarshan and Star Plus, the private channel would both be airing it so it could reach the masses, even those who cannot afford cable, is commendable. Reality shows have also taken the nation by storm as channel after channel now encourages new talent be it dance, music, stand-up comedy or any other talent. Parents are more open to let their children step foot into this world as they now appreciate the fame that comes along. Indians worldwide furiously punch numbers on their Vonage phones wanting to vote for their favourite contestant.


Yes, Indian television has certainly come a long way. Public display of affection has progressed from the innocent flirting and the random peck on the cheek to uncensored lip locks and more. Saga-makers justify this stating the improved maturity of the Indian audience while still-rooted-in-tradition viewers of primetime slots showcasing adult romance look away squeamishly or change channels not wanting to expose their children to these trends just yet.

And yet, in a sense, nothing has changed. We continue to live our lives by these shows, relating to the characters in one way or the other. Good or bad, they subconsciously continue to influence at least a tiny part of our expectations from our mother-in-law/daughter-in-law, husband/wife or boyfriend/girlfriend. Socially upright shows manage to leave their footprints on our routine highlighting issues worth fighting for like corruption, hygiene, civic rights and such. Day-to-day fashion clothing trends, hairstyles, use of language and even marriage-proposal techniques continue to draw inspiration from television. My 8 year old nephew, a huge fan of our homegrown detective series CID, went so far as to get his father to set up an appointment with ‘Daya’ through a chain of mutual friends and couldn’t stop talking about it.

Whatever be the case, Indian television continues to evolve by the minute and there’s positive acceptance of experimentation with the script, unreal twists and turns in the plot, completely off the track stories and such, as demonstrated by some of the recent serials that showcase a eunuch’s marriage, a dwarf’s story, the trials and tribulations of a village girl wanting to become an IPS officer while she’s married to a sweet maker. So, even as Ekta Kapoor’s characters have stopped dying and miraculously reappearing, Indian audiences continue to devour up whatever they are served. And this is not limited to Indians worldwide. Youtube videos are rife with comments from Spanish, Vietnamese and Somalian folks who do not understand Hindi yet watch the shows with equal passion and wait for subtitles zealously. And, four years later, though I no longer work with my Venezuelan friend, he still talks about these shows whenever we happen to spot each other. So, even as Indian shows gain world wide popularity, regardless of the content, regardless of whether I believe in that particular show or concept or not, I cannot help but feel a wee bit proud that this is just one more arena where we make our mark on a global level.

Primetime shows continue to be aired five days a week and actors continue to be overworked and exhausted. So what is it that makes these TV shows tick? What kind of expectations does the Indian audience have from primetime TV sagas? Can Indian Television afford to go the western route restructuring shows into seasons and thereby awarding the exhausted actors regular breaks or would that cause a rebellion? And more importantly, where do we see Indian Television ten years down the line?


I would love to hear your views!

31 thoughts on “Saas-Bahus and Beyond: Indian Television”