Skip to content
It’s been a week, since March 8th, 2012. I remember this day more because it’s my friend Sujatha’s Mom’s birthday and less because it’s Women’s day. All day long on March 8th, several friends and colleagues wished the world a Happy Women’s Day on Facebook. Among these messages, were also the one-off “What about Men’s Day” posts, to which some females had responded in jest, saying “Every day is a Man’s day!”. My 2 cents – Not that I don’t appreciate the posts, but do we need a Men’s day or a Women’s day? Yes, we attribute and acknowledge our women on this day, we appreciate women from different ranks and fields – talk high of their achievements, but what happens the remaining 364/5 days of the year? I think the same of other “Days” too like Mother’s Day, Father’s day or even Valentine’s day.
Today recognition, fame, respect and acknowledgement are all considered sufficient as long as we pay our dues through Facebook. So what if India’s sex ratio in 2011 is only 914/1000? So what if despite considerable progress in education and awareness, the ratio has, in effect declined from 927/1000 from the last census of 2001? So what if a lady is capable of performing shoulder-to-shoulder with a man be it in sports, education, engineering fields, the defense, medicine and yet there are only an average of 15 girls in a class in an engineering college compared to an average of 50 boys?

At one end, women are worshipped as Goddesses. The Goddess of wealth Laxmi is welcomed every Diwali, the Goddess of Education Saraswati worshipped along with books and tools and electronics every year, Kaali Mata, Parvati – the Goddess of Fertility and so many more. Yet, at the other end in their human form, they are humiliated, atrocized, debased every day. I have had a couple of MCP people at work subtly suggest that females should stick to house work, suggest alternate times for us females to go play table-tennis in the common recreation room because the “peak times are for men!”.  This in the city, I shudder thinking about the kind of lives women lead in the villages. Of course, until one has seen or lived the alternative, they would assume life is good. The recent number of rapes that got reported in Delhi (added to the ones that did not) is a clear indication of this double-standard treatment. Oh well, we keep trudging along. Slowly and steadily, step by step. 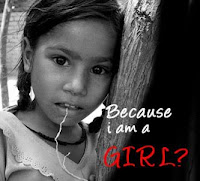 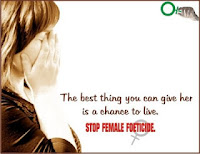 Yes, there are situations where women cannot equal men and we would be foolish if we do not accept that. In nuclear plants, women (specifically pregnant women) are not preferred as reactor operators, because the radiation can harm the baby. Yes, Economic Times named Sania Mirza in the list of the 33 women who made India proud. She might be India’s #1 Tennis Player in women but when pitted against the top tennis players of India, she might not make it within the top 5. The physical strength and endurance are not comparable and we are simply wired that way. But the good part is, for every such Sania, Kalpana Chawla, Shreya Ghoshal there are more girl children now being encouraged to participate and move ahead in life.
Yet, I strongly believe that women and the nation can definitely progress being cognizant of the differences. I had read a statement somewhere which went something like “You can judge the progress of the nation looking at the way the nation’s women are treated”. Up until then, I had never looked at it this way. But I sat thinking and it rang true.
I happened to watch the movie “Matrubhoomi: A Nation without women” today. Recommendation: Do not watch. Its a sadistic depressing movie about the atrocities against women in a village that runs out of the female sex eventually due to infanticide. It is what caused me thinking about the whole situation and hence this post. Do not also ask me why I watched it. The film received widespread critical acclaim, was awarded a couple of awards for raising social awareness. The film shows a rural village in Bihar and was made in both Bhojpuri and Hindi. My take on it – such films are never commercially released, they don’t really reach the intended target audience, specifically the people in the remote villages of India who should ideally be watching it. Most people in the cities also wouldnt go to watch it. But I commend the effort and the thought behind the film. I only hope there had been independant screenings in multiple cities and small towns, villages etc.
How does the situation change then? Do reservations help? I am personally against reservations. Start with one such idea and you end up opening the gates to every other Tom, Dick and Harry fighting for reservation in the name of caste, religion and whatnot. Recently, the BEST buses of Mumbai increased the “Mahilan Saathi” (Ladies Only) seat capacity from 6 to 12. Result? More frustrated men and more arguments in buses between the genders. One time, I saw all 12 seats taken up by females and a pretty-along pregnant lady standing and switching her weight from foot to foot. Not one man or woman offered to give her a seat. Try to force an idea and it will boomerang. Instead, BEST could have started “Ladies only” buses at peak times to help.
Yes, in an effort to improve the genetic imbalance, there will need to be some strict measures taken. But take from one to feed the other will only cause more disruptions. If one sibling does not like giving up his/her toys for the other, how do you expect a whole population to react easily with acceptance? That being said, we cannot give up on the goodwill and efforts being put in to innumerous “Rescue efforts”, as I would call them. I salute the folks who put in their time and money into the uplifting of the girl child. Its one more form of development – a way to help the country progress. Why shouldn’t I then? There are n number of NGOs that support and help the girls on the street, girl children rescued from red-light areas, help with their social upbringing, in educating them and so on. Religious and social dogma will continue to take precedence for a while. Social rehabilitation will not happen in a heartbeat. In order for the movement to gather weight, every individual’s mentality will need to change. The day our men start treating females as one of their own, as an equal, as a human instead of an object or a form of sating one’s sexual desires is the day we would truly celebrate Women’s Day. Do you agree?