Skip to content
So, I have this list going where I am trying to put together 100 things I would like to do before I die. Whenever that may be. When I started compiling the list, I had thought this would be a very simple task.  Little did I know that making a list of 100 things would be so difficult, let alone achieving those. Yes, you read that right. I can’t find 100 things I would like to do before I die. Well, I have 51 items on the list so far, there were close to 80 originally but then I took out stuff which I knew were definitely impossible and revised some of those to make them achievable.

Like there was this one which said “Set foot on all 7 continents”. Now I don’t want to visit Antarctica ever. Why? After having stayed in MN where there’s 8 months winter and usually ~2-3 months of negative Fahrenheit, this is the closest I want to get to sub-zero temperatures! And Antarctica is at a negative 100F at least. Both of my wishes are contradictory and so obviously, that “thing to do” went away.

Then there was one where it read “Swim with the dolphins in the Atlantic“. Doesn’t that sound romantic? To those who know my swimming skills, that’s kind of a stupid goal, unless I want to have a dolphin rescue me from drowning. So this one got revised to “Swim the length of a pool”. If that gets fulfilled anytime soon, then the dolphins could hope to enjoy my company someday.

Now, why just pen down stuff which I want to do. Why not write about those as they get fulfilled as well? So here’s bucket list# 13, the one that got fulfilled the first. And, at the end of each, am even going to add a tiny little note on a secret desire related to the “achievable” one. Here goes.

Get my hair coloured. Check!!!

For some strange reason, I had this wish to get my hair colored (all over color, not just streaks) and it had been on the books for a while (since 1998 or so) but I never had the courage to go along with it. Seems harmless right? One would think so. Finally in 2009, during my India trip, my sister was pumped up enough to want it for herself. She even worked out some discount stuff with her usual beauty parlour, using a friend’s membership and such. Off we went, and duly spent the good part of an hour choosing the colours. She, the then more courageous one, went with one streak of a nice deep red and I chose three streaks of a safe brown coz I had to go back to work. That was the most risk I was willing to take. Maybe it had to do with age taking a toll on my risk-taking spirit or the effect of the movie Bride Wars, which I had recently watched. I kept waiting for my hair to turn blue, like Kate Hudson’s did in the movie, when the hairdresser was taking off the foils. Well, it did turn out just fine and was a good feeling while it lasted. I loved the way the sunlight used to play with my hair showing the beautiful highlights and I would toss and turn in front of the mirror. I wish I had a picture to go with this.

A few months later I even went with 10 streaks of red, when I was home on a break from work and that was even more fun, except they only lasted about 3 months. Then it turned brown and soon even that was gone. Once, I even went in for a full highlight!

A related secret desire is to be able to once get a full hair colour of a combination of purple and green. I know I would never go along with this but wouldn’t that be fun!! Yeah!! 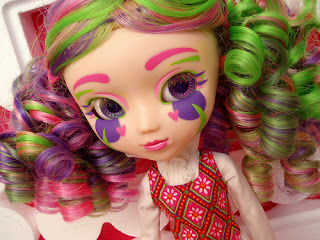